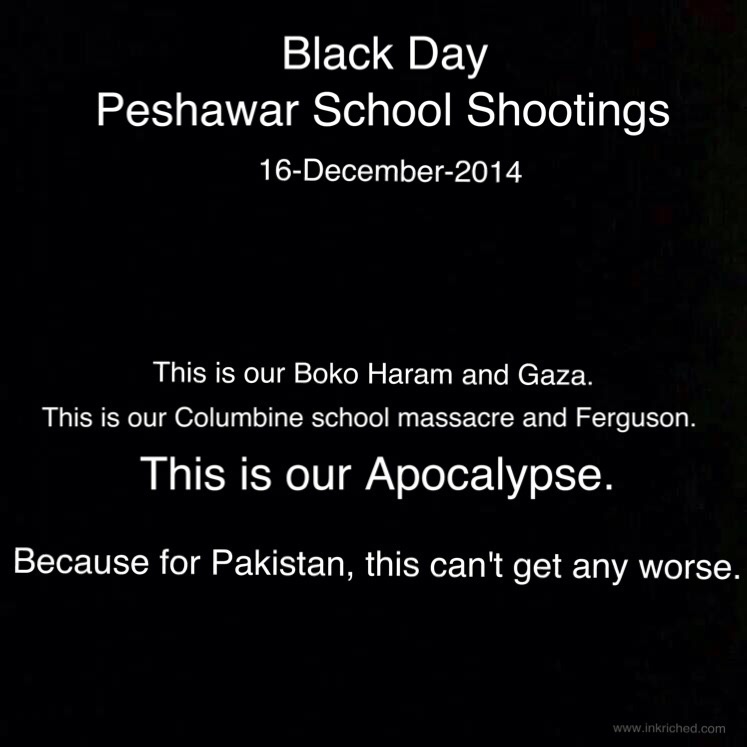 You don’t expect to send your children to school and never see them again.

But then you do. Because it happens. It happens to our people. Our children. Our teachers. Our schools.

An Army public school in Peshawar (Pakistan) gets run down by gunmen leaving more than a hundred children dead in cold blood and a few teachers.

You’d think these excerpts were from a movie, but this atrocity happened only a few hours ago.

Khan said he felt searing pain as he was shot in both his legs just below the knee. He decided to play dead, adding: “I folded my tie and pushed it into my mouth so that I wouldn’t scream. The man with big boots kept on looking for students and pumping bullets into their bodies. I lay as still as I could and closed my eyes, waiting to get shot again. My body was shivering. I saw death so close and I will never forget the black boots approaching me—I felt as though it was death that was approaching me.” Newsweek Pakistan

I was sitting in the corridor with 10 of my classmates when we heard firing. We immediately ran towards the classroom to hide there but the militants chased us down and found us. They were dressed in shalwar kameez and the only thing they told us is: ‘read the kalma’,” said Ali, remorsefully adding that he was the only one of his 10 friends that survived the attack. The Express Tribune

It’s not about heartfelt condemnation and hysterical tears rolling down our cheeks as we try to make sense of this incident. Because how do you put such insanity into words? Do you dig up strong emotional verbage from your language, or make  use of cuss words? Or write status updates and substitute sad emoticons on Facebook with those of tears pouring out? How do you express the lowest of lows?

It’s not even about narrowing down a believable reason for the brutality. Or getting into an endless political debate and accusations. Let’s assume the attackers lost their children in anti-terrorist attacks conducted by the Pakistani Army so this was their payback. Even then, does this level of vengeance add up? Does anyone win here?

It’s about a raw, uncut version of life that has been shoved in our faces. So we realize how inconsequential our existence is. It’s about the strength and ability to endure hell and then get back on your feet. Because that is exactly what parents of those martyred angels will do. They will survive. Even if that means with nothing but a shredded heart and blinding pain.

This is our Boko Haram, Ferguson, Columbine school massacre, Gaza, Apocalypse all in one. Because for us, nothing can get worse. Not the worst of natural travesties, famines or wars. This incident single-handedly shattered the thin line between what’s expected in ruthless terror attacks and what isn’t. Now there are no barriers or false reassurances like, ‘Oh they can’t possibly target children!’ And what comes next? Hospitals, weddings, parks, funerals? Pakistan’s flag has soaked in too much blood of too many innocent lives. And it shocks me to think how these blood stains might never wash away.

This day marks the beginning of changed ways in Pakistan. As a parent. As a student. As a teacher. There’s a lot that comes in that package now. Like a bad memory, this will become a permanent part of everyone’s minds. Parents will drop off children to school with tighter hugs and longer kisses on their foreheads. Teachers  will zone out during a lecture and imagine a class pouring with blood or at best, train themselves to handle these attacks . Students will fall prey to paranoia and fear. With time the intensity will wear off, but the facts will remain.

What will I tell my children?

Years from now, if my children ask me about the 16th of December, 2014, what will I say? Will I say that their native country could not protect children who were just like them? Will I tell them I also studied in Pakistani Army public schools my entire life and those school years represented some of my most precious memories? Will I tell them it was all in the name of religion but it really wasn’t, because murder has no place in any religion? Will I tell them how life usually doesn’t make sense, especially when it comes to death? Will I tell them they need to be grateful every breathing minute of their lives because many children like them don’t live to see another day? Will I tell them that life goes on, no matter what?

Will I tell them that Pakistan survived, notwithstanding the END it witnessed that day and came out stronger and better? I hope to God that above all else, I tell them this.