In linguistics, the difference between a developed and developing country is a mere suffix – ‘ed’ or ‘ing’. In reality, the transformation is excruciating. Like a butterfly shedding its cold and hard home, its chrysalis. 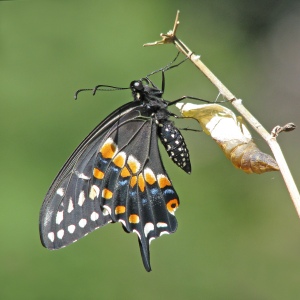 Pakistan turned 67 years old yesterday on 14th August 2014. In human years, sixty-seven years is about white hair, wear and tear of the mind and body, and a lot of wisdom (or lack thereof). In country-years, sixty-seven is a toddler scraping his knee from falling too much. There are always exceptions; toddlers who walk or run before their time. But Pakistan is not that toddler. Pakistan needs more time to straighten its walk. That’s all.

Yesterday I thought about Pakistan’s status as an independent state. I watched local television that showed flag-painted faces, made-up women in green and white dresses dancing and singing to patriotic songs. I remembered school and universities hoisting the Pakistani flag and holding independence day celebrations. The news was bombarded by the freedom and revolutionary march headed by politicians Imran Khan and Tahir-ul-Qadri. I read posts of ex-pats drowning in nostalgia and praying for their homeland. I read Facebook statuses badmouthing the situation in Lahore and Islamabad because of the long march. I also heard chants of hope and change emanating from a selected few. I heard everything that I hear every year on the 14th of August. An unending cycle of hope and despair, taking turns to show its face like a ride on a sea-saw.

Rants about corruption and terrorism have long been exhausted.  There is an unlimited supply of accusations and poignant speeches about Qaid-e-Azam shifting in his grave due to Pakistan’s current situation. Occasional incidents shock us. Most leave us indifferent and scornful. This independence day, as an ex-pat who chose to leave her country behind, I wanted to feel bad for my country. I had all the reasons to because all that can go wrong, is. But I also knew that sitting far away, problems magnify with unrealistic proportions. I remember relatives or friends living abroad calling to ask about the deadly situation. I’d always hold the media responsible. Sure, things were terrible, but surely bullets weren’t flying over our heads as we ate Fruit Chaat (Fruit salad) on the curb of Lahore’s famous Liberty Market. Life goes on with exceptional vigor every day in Pakistan. Resilience comes back with the astounding accuracy of a boomerang.

I am learning to think past the grey and look forward to the colors. Compelled as I was, I couldn’t subdue feelings of hope as I donned a green and white shalwar kameez at home yesterday, sitting continents away. I couldn’t stop comparing my beloved land to a butterfly trapped in its dingy home, waiting for the right time.  Call me delusional, call me unrealistic, but I have seen my country in some of its God-given glory and I know what it is capable of. We are a free nation. We always have been. I don’t think it’s possible to take away a person’s freedom. As long as you are brave enough to think, you are free.

A couple of months ago I made a pact with myself. I would not join the line of critics and naysayers predicting the downfall of the country. I would not join ex-pats and other Pakistanis in their drawing rooms to throw mud on my country’s face. Social iniquities that dominate don’t define the entire country. It’s important to highlight and bring awareness when it comes to evils; Not just for the sake of criticism but to ignite small flickers of change. I see that change in the mindset of new generations, when they go to work each day bent on earning an honest living. I see that mindset shining through archaic concepts of the older generations, when they admit their past mistakes and strive to correct themselves.  As long as these tiny flames cast shadows of hope, and as long as the Pakistani flag sways with life, I will not let anyone call my country a failed state.

Any inkriching words for me:)? Cancel reply