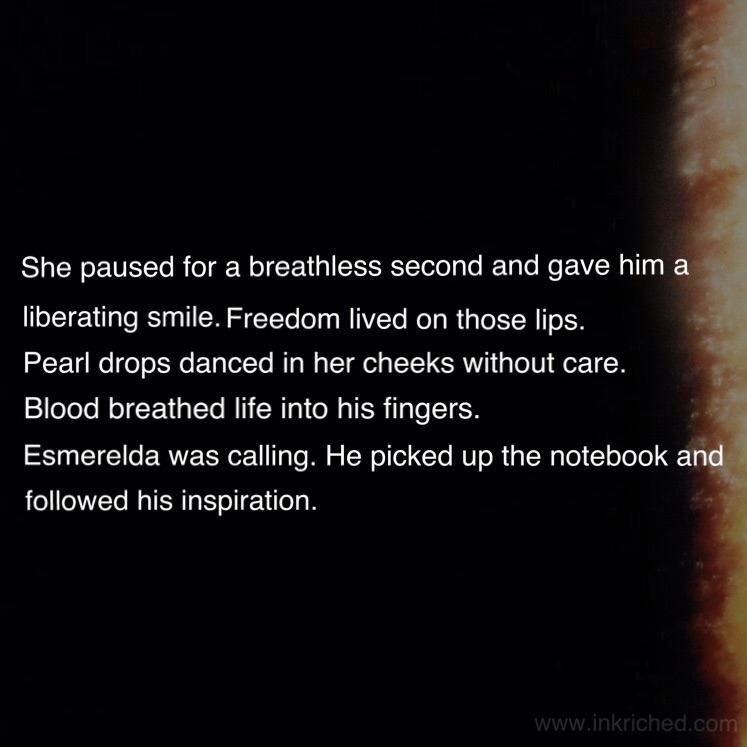 Dry leaves somersaulted across the road. He crushed the few that landed under his well-worn moccasins. Crunch. Crunch. The sound filled up all the spaces where he felt like a non-writer. The sound pushed past the stale odor of unused ideas. Dug beneath layers of recycled frustration. The sound was a pleasant distraction.

He knew he had a story in him. A thought resuscitated on the worst of days. This morning, he took it more seriously than before. Last February, he dared to go to a coffee shop to find his writing muse. He spent the day over-stressed and over-dressed. A probable bad combination for some writers. A definite one for him.

Almost a year and a half later, there he was again. Sitting on the park side bench trying to look like an important person, doing important work. There he was, hoping to squeeze out a story from his guts , wringing till every last drop came on paper. A buzzing, whizzing park was perfect. A meeting point where inspiration could woo its evil twin into a  slow, dignified death. So far the only dignity he encountered was of the leaves that died with honour under his feet. It was still a better bet than sitting cooped up like a rabid chicken, clucking and clicking on his desktop 25 hours of the day. 24 was never his number. 24 rejected manuscripts. 24 years of abuse. 24 landlords.

His mother always joked about the sardine tin his apartment complex was. One building stuck to another building that was stuck to another. His room was as tight as his lips got every time anyone asked about his published books. The sacred most point in the room was a walnut oak, crooked book shelf that leaned towards the right like it was trying to show him something. He made up hidden messages and symbols from ordinary everyday objects. Most of the shelf was filled with mummified manuscripts. The rest he categorized by his appetite from sumptuous to inedible. He re-read the latter the most. The most important part of the shelf was an entire section reserved for his unborn books. A book nursery of sorts. He would stand in front of it twice each day. An excited parent-to-be, all giddy and anxious about the future.

Sometimes he didn’t mind reliving the 21st century version of the hunchback. Bending over his favorite notebook, his leather-bound, fading Esmerelda.  Jotting down story ideas and anticipating of his turning to dust when separated.”Nah.” He decided there was always time to die dramatically. Today he was going to spend a day at the park.

Wind stopped in its weightless tracks to ruffle the skirts of passing girls. And skewed the hats of little boys playing catch under the shaded trees. Maybe he could write a love story that began at the tree near the merry-go-round, and ended in the graveyard in the next block. “Nah.” He wanted to write something rustic, more basic. But what was more basic than love, life and death? He was still hopeful.

A little girl slipped and fell in front of him. Behind her loud wails, he thought of a rock climbing protagonist falling to her fate in the Karakoram. “Nah, ” he mumbled before walking over to help the girl. She limped away without a thank you, and much louder sobs.

The wind calmed down. His nerves didn’t. Nothing spoke or touched him the way he had imagined. His words were still locked shut. He stood up to stretch his cramped knees beneath plaid trousers. Just then, the sound of gravel pressing against the ground caught his attention.

A woman, in her 40’s, rolled over in her wheelchair. She paused  for a breathless second and gave him the most liberating smile. Freedom lived on those lips. Pearl drops danced in her cheeks without care. Blood breathed life into his fingers.

Esmerelda was calling. He picked up his notebook and followed his inspiration.

Any inkriching words for me:)? Cancel reply